Things to do and places to see in Glastonbury:
​
Glastonbury Abbey 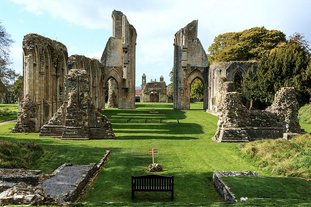 In the peaceful parkland of the Abbey Grounds in the middle of Glastonbury, lie the ruined remains of the once magnificent and powerful Benedictine Abbey, destroyed by Henry VIII in 1539 during the Dissolution of the Monasteries. Little of that former glory – at its height in the late medieval period - is now evident amongst the preserved ruins, but what does remain in the quiet and serene parkland is a distinct power of place. As in most of the sacred sites on the island, the energy is there and readily perceptible, allowing you to touch into energies and memories of that distant past, still held here in the land, going back in time far beyond where history takes us.The power of the medieval abbey and the sanctity in which it was held, owed much to the many  legends and stories concerning its foundation and early years, which are still thriving today.
It is commonly believed that long before the first Christian community was established, the island and its landscape was already regarded as a sacred place, integral to the harmonious balance between humanity and its connection to the natural world, the heavens and the Divine. This balance was maintained through sacred ceremony and ritual in the land, which also had the effect of continually sanctifying the land and all beings in it. Both the early Pagan tribes and the later Celtic ones participated in this tradition, including maintaining a so-called perpetual choir, set up to continually keep the right sacred vibration sounding throughout the land. It is believed that a Druidic college was already established in Glastonbury when the company of Christian men would have arrived, and many of their traditions were merged with those of the new-comers and over time developed into what we now know as Celtic Christianity. This particular Christian tradition of worship seems not to have survived far beyond the arrival of emissaries from the Roman Church around the middle of the first millennium CE. 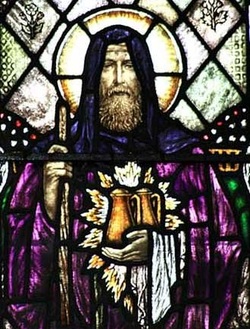 In legend, the first Christian community was established here by Joseph of Arimathea – uncle to Jesus Christ and a wealthy tin merchant – who returned to this place some years after the crucifixion (maybe CE 63) with a company of twelve holy men. Supposedly, Joseph of Arimathea also brought the cup from the Last Supper with him along with two small cruets containing the blood and sweat of the Christ on the cross. The legend mentions how they built a small wattle – or wooden - church on this site, probably surrounded by their huts or cells. The wooden church was preserved and developed over the centuries, treasured and kept sacred as the “Old Church” or “First Church” – i.e. the first Christian church in England and maintaining a direct link with the divine through its connection with Jesus Christ.

St. Patrick came in the 5th Century and introduced a regular monastic life amongst the resident anchorites, as did St. David later on. They are both known to have developed both the community and the “Old Church” building into a larger holy Christian Community – the early beginnings of the later Benedictine monastery. The Charter of King Ine in 704 saw the expansion and re-organisation of the existing monastery along Roman monastic lines.

With St. Dunstan – the greatest abbot - a new abbey was built in about 950 around the old wooden church, still apparently holding the structure of the sacred “First Church”within it and the monastic community continued to grow rapidly. By the Middle Ages the Abbey had grown into the rich, powerful and influential Benedictine Abbey, whose ruins we see in the Abbey grounds today.

After the great fire in 1184, expansion was halted for some years, while rebuilding took place. A new building was erected on the site of the now destroyed “Old Church”, echoing back to the sanctity of the ancient building through the use of sacred geometry and dedication to the Feminine. The new Mary Chapel was held in similar sacred esteem as its predecessor, which continues to this day. The spirit of place in that ancient sacred site can still be strongly perceived today.

During the early years of rebuilding, one particular event added greatly to the reputation and power of the Abbey -the claimed discovery of King Arthur and Queen Guinevere’s grave. Their bones were later transferred and re-entombed before the main High Altar, but disappeared after the dissolution.
The discovery of these remains coincided with a simultaneous revival and flowering of the legends of the Holy Grail, the Arthurian legends of the Knights of the Round Table and subsequently an upsurge of interest in the Grail Quest – the search for the Holy Grail, in which Avalon held a central position, symbolically and also literally - as a place to visit.
These relics, and others still held by the Abbey, as well as the reputation of the Abbey as the birth place of Christianity in England, began attracting great waves of pilgrims, from all over Britain and the continent, which continued right up till the dissolution in 1539, and giving immense support to the Abbey’s reputation and its wealth and influence.

Richard Whiting was the last abbot of Glastonbury Abbey. During the Dissolution of the Monasteries, which might have started as an excuse for King Henry VIII to destroy the power and influence of Rome and gain the riches for himself, but became a long period of social and religious upheaval, Whiting was tried for treason towards the end and then hung and quartered together with two of his monks, on Glastonbury Tor. In later years this event came to be seen as judicial murder. After that the Abbey fell into disuse and ruinous decay. In 1906, the ruins were acquired by the Church of England and excavations of the site begun, led for a time by the architect and Sensitive, Bligh Bond, who eventually was sacked for his unusual research methods.
The Church of England remains the present owner of this ancient sacred site.
Visit the Abbey's website..