Things to do and places to see in Glastonbury:
The White Spring 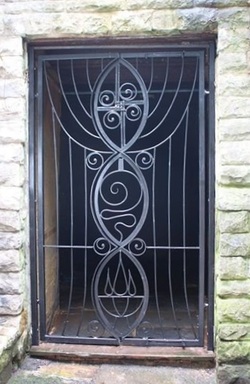 Next to Chalice Well, in Well House Lane is the White Spring. The building of a reservoir over an attractive combe, by the Water Board in 1872, was met with huge opposition from local antiquarians, objecting to the destruction of a popular beauty spot much frequented by locals. A site steeped in history and mythology, the antiquarians said that stone foundations could be seen and possibly the remnants of monk’s cells. They also said that the water of the spring coated stones, as well as the branches and leaves that dipped into the water with a heavy white calciferous deposit. George Wright (1896) wrote:
“And what was Glastonbury like then? One thing that clings to me was the beautiful Well House Lane of those days, before it had been spoilt by the erection of the reservoir. There was a small copse of bushes on the right hand running up the hill, and through it could be, not seen, but heard, the rush of running water, which made itself visible as it poured into the lane. But the lane itself was beautiful, for the whole bank was a series of fairy dropping wells – little caverns clothed with moss and vedure, and each small twig and leaf was a medium for the water to flow, drop, drop, drop into a small basin below. This water contained lime, and pieces of wood or leaves subject to this dropping became encrusted with a covering of lime. For a long time I attended those pretty caverns with affectionate care, and Well House Lane was an object of interest to all our visitors” 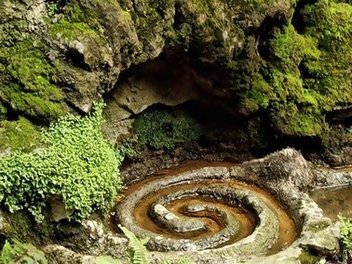 ©www.stardustphotography.uk
At the turn of the century, outbreaks of cholera in the area were a great concern and the natural caves were dug out, and the stone collection chamber was constructed to ensure the flow of a quality water supply. Study of the flow of water into the collection chamber has shown that the builders also tapped into other springs, besides the White Spring. Judging from the high iron content of one of these springs, it appears that a small offshoot of Chalice Well finds its way under Well House Lane to emerge besides the White Spring.

The White Spring itself has a high calcium carbonate content, originating from the limestone that underlies the area. Calcium carbonate, or calcite, will crystallise into a variety of forms or create flowstone formations. Flowstone formations  are created when water oozes over the cave walls or floors and the calcite in the water gradually hardens into a smooth, shiny surface. Hardened calcite itself is colourless, but flowstone can be colourful if minerals from the soil and rock add new hues. Flowstone formations look like melted cake icing or a frozen waterfall. Examples of these can be seen at the nearby Wookey Hole caves near Wells.
Imagine then how spectacular Well House Lane must have looked before the reservoir was built.

It is said that the combe was an entrance to a system of caves beneath the Tor and the Underworld of the Celtic tradition. This Underworld was the home of Gwyn ap Nudd, King of the Fairies and Lord of Anwnn. The Welsh Saint Collen was said to be Abbot of Glastonbury Abbey in the 7th century and on his retirement, he retreated to a life of contemplation beside a spring at the foot of Tor. It was St. Collen that banished Gwyn and his actions amounted to an exorcism of the underworld realm. Many people believe that that the Fey Folk simply shifted to another dimension and still reside in the Tor. The fairy dropping wells as described by George Wright would have helped to continue the belief that this was indeed a place touched by the Fey.

After building the reservoir, the Water board soon discovered that the high calciferous content of the water caused pipes to block and by the end of the 19th century water was piped into Glastonbury from out of town. After lying derelict for many years, the Water Board sold off the White Spring. The pump house has now been converted into a temple space, created in gratitude for  the gift of pure water. In blackness  or candle lit, The White Spring offers a wonderful contrast to the sunlit gardens  of Chalice Well. With its constant temperature and the sound of the perpetually flowing water, it is a unique and sacred space.

On the outside of the building is a tap where visitors and locals can collect the water of the White Spring.