The Story of the Glastonbury Thorn: The Recent Chapters 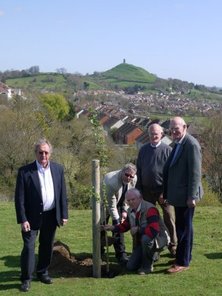 Photo: Morgana West
On the 1st April 2012,  working with Glastonbury Conservation Society, the landowners of Wearyall Hill  planted a new Glastonbury Thorn close to the vicinity of the old one. The sapling was not one of the young ones being nurtured at Kew and came  from a nursery in Devon, their parent tree having come from Glastonbury Abbey via Oxford Botanic Garden.

Revd. David McGeoch,  Vicar of Glastonbury, gave a blessing, linking the young tree to its past and thus creating a new Holy Thorn.  However, fifteen days later, this one too was destroyed, the stem has being snapped off about 18 inches from the ground.

Following this second attack, a message from Morgana rippled worldwide via the media stating;

“Mindless at it seems, they can never damage the ‘Glastonbury Thorn’. More than just a tree, it is a symbol of the good things in our community and in the wider world around us. Whilst there are those who might ‘hack away’, they can never destroy what is in peoples’ hearts and hopes.”

In January of 2013, Morgana, Cllr. Bill Knight, John Capper and Dharam Barratt travelled to London to the Royal Botanic Gardens at Kew. Their mission to collect one of the saplings, a descendant of the Wearall Hill Thorn so that it might be planted in the town.
The young sapling was brought back to Glastonbury, ready for planting in the heart of the town alongside a World Peace Pole in a community event on 26th January 2013. Morgana felt that by placing one alongside a new Glastonbury Thorn, a strong message of Peace and Unity through Diversity would be conveyed to the town and its visitors.

"More than 70 faiths and beliefs are upheld in Glastonbury, a greater concentration per capita than anywhere else in the world. Following the success of our event ‘Glastonbury 2012: Unity through Diversity' where many representatives of our diverse community gathered together in celebration, Glastonbury is now being given the opportunity to send this message out into the world. The Glastonbury Thorn is an internationally significant tree to many people and the event, which will be attended by our diverse community, offers a simple but key message showing that the branches of the Glastonbury Thorn all grow from one stem. The message of Unity through Diversity recognises that whilst we might all be different and go in our own direction, we are all part of the same source, stretching towards the same sky with our roots in the same earth." - Morgana West