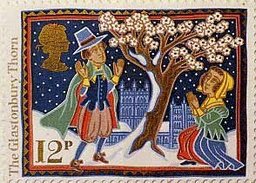 The beautiful Barrow Street Gardens  in the church’s walled gardens were laid out in 1950
A tree grown from a cutting from the Glastonbury Thorn grew here from 1847 until 1990.
We have also found references to the following places.
Any further elucidation very warmly welcomed.

A Glastonbury Thorn is part of the collection at VanDusen Botanical Garden.  and is dedicated to VanDusen’s
​ original Curator and Garden Director, R. Roy Forster.
Victoria, Canada
In 1938 Katherine Maltwood, (re-discoverer of The Glastonbury Zodiac) and her husband, John, emigrated to Canada. They took with them a scion from the Holy Thorn in Glastonbury to plant in their new garden. This tree is now situated adjacent to the Maltwood Museum on the campus of the University of Victoria.
James Austin (1810-1896) was born at Baltonsborough, just outside of  Glastonbury Somerset, the fifth son of John Austin. His uncle, James Austin, had been a forced founder of Hobart Town in Australia. In 1825 John Austin's second and fourth sons, Solomon and Josiah, emigrated to Australia and In 1831 Josiah collected his parents; the third son William, James, and Thomas; and his sister Anna,. Their convict pioneer uncle died before they arrived in Hobart, but all benefited by his will.

James went on to develop his Avalon freehold and quickly grasped the potential in urban Australian lands. He was an alderman of Geelong's first town council, and in 1851 its second elected mayor. In 1856 he retired and returned to his birthland, Glastonbury. Somerset.

Five of his nine children were born in Glastonbury, where he bought the abbey house with its 'interesting ruins in the grounds'. He was four times mayor of Glastonbury. In 1889, he returned to Australia.This time he took with him a very special gift which he planted at Avalon.  He also planted a second cutting  in the grounds of his nephew Sidney's home, Lunan House at Drumcondra., Lunan went on to become Geelong Teachers' College. L.J. Blake, in his 1971 Geelong Sketchbook, writes: "When, a century after its building, in the ground still flourished a descendant of the tree that reputedly grew from the thorn tree staff brought from Jerusalem to Glastonbury by Joseph of Arimathea, during the first century AD.''

Austin's second son took Avalon, and grafted a sculptured bloom of the Holy Thorn into the bluestone homestead with which he replaced the first. This stone from Glastonbury brought. Into the wall of Avalon is wrought. Stay for a moment traveller & view. This link between the old world & the new.


Taken from the original Avalon cutting of James Austin's when it grew into a tree. It was struck in the grounds of the property Warrain by the next Frank of the Austin dynasty. This tree thrived for many years until 2001 when, as Geelong botanical historian George Jones says: "It was found to be rotting underground, evidently the result of damage occurring when an adjacent fence was being replaced''.


"It was growing at Salt Haven, 72 Francis St, Belmont , formerly the home of Mrs Doris Pidgeon, She told me her mother-in-law, Mrs Florence Bullivant, who was a grand-daughter of James Austin, had visited Glastonbury twice in the 1930s and on one of those occasions brought back a cutting, planting it at Salt Haven. Growing close to the front fence I was able to examine it whenever passing. On October 31, 1999, I noticed a secondary branch had pink flowers, all the others being white.'' George Jones.
Canadian references:
http://www.maltwood.uvic.ca/k_maltwood/history/museum.html
http://vancouver.ca/vandusen/treeMonth/glastonburyThorn.htm